Fully support this. No one needs a 40 cal. twitter.com/TPSGunsSeized/…

Thank God... we are now all so much safer. 😱 twitter.com/TPSGunsSeized/…

What kind of person thinks, "You know what would be a fulfilling career... the IRS"

Is there another California I’m not aware of where this is even remotely true? twitter

Recently wrote an Op-Ed on firearm age restrictions and why they don’t work.

The original title before they changed it without telling me was:

No, You Cannot Strip Young Adults of Their Constitutional Rights Because We “Must Do Something” twitter.com/sdutopinion/st… 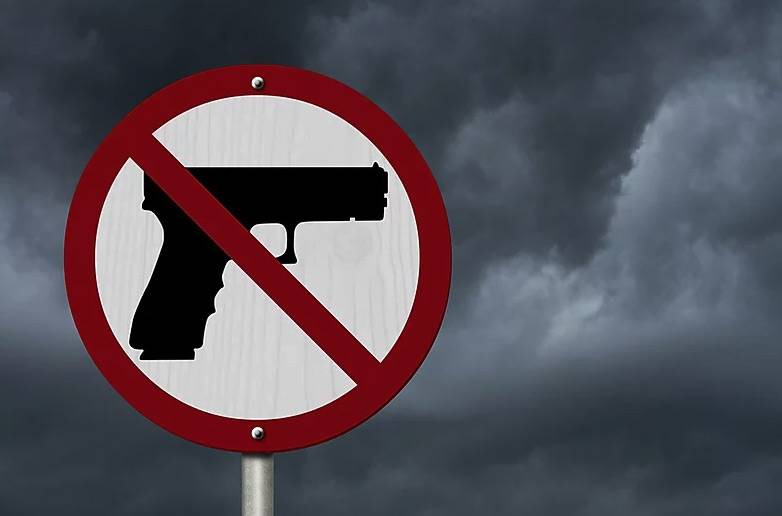 The California legislature continues to introduce more and more increasingly restrictive gun laws in the form of Assembly Bills (ABs) or Senate Bills (SBs). Recently, three ABs have been introduced, that if passed, will drastically change gun ownership in California.

For those who do not fall under California’s jurisdiction, the state already has an “assault weapons” ban that prohibits semi-automatic, centerfire rifles with a detachable magazine, and other cosmetic features such as pistol grips or collapsible buttstocks. Under the current law, any firearm that falls under this definition is considered an “assault weapon” or “assault rifle.” This law essentially bans ownership in California of all AR15, AK47, and similar rifles (see below for the applicable exceptions).

Additionally, California also already has a list of specifically prohibited firearms that are banned by make and model; a microstamping law for handguns (preventing any new handgun model from being sold unless the firing pin has microstamping technology to imprint the bullet casing with a serial number); and a certified list of approved handguns for sale by federal firearms licensed dealers. These laws are only the tip of the iceberg, as they represent a small sampling of the many other firearms laws in California. Not only are these laws dangerously overbroad, they are so poorly written, many California gun owners (who objectively do their best to learn the laws responsibly) may be in violation without even knowing it until it is too late.

Below is a summary of California’s latest attempts to unduly restrict gun ownership.

Existing law regulates the sale, carrying, and control of firearms, including assault weapons, and requires assault weapons to be registered with the Department of Justice. Violation of these provisions is a crime. Existing law defines a semiautomatic, centerfire rifle that has the capacity to accept a detachable magazine and other specified features and a semiautomatic weapon that has a fixed magazine with a capacity to accept 10 or more rounds as an assault weapon.

AB 1663 would reclassify as an assault weapon a semiautomatic centerfire rifle that does not have a fixed magazine with the capacity to accept no more than 10 rounds. The bill would require a person who, between January 1, 2001, and December 31, 2016, inclusive, lawfully possessed an assault weapon that does not have a fixed magazine, including those weapons with an ammunition feeding device that can be removed readily from the firearm with the use of a tool, and who, on or after January 1, 2017, possesses that firearm, to register the firearm by July 1, 2018.”

So what does AB 1663 mean to gun owners in California? AB 1663 would expand the definition of “assault weapon” to include all centerfire semiautomatic rifles that have a detachable magazine. This definition basically bans all semiautomatic rifles (with a few exceptions). Popular rifles such as the M1 Garand, Mini 14, Mini 30, M1 carbine, and the Benelli MR1 would all be considered assault weapons. These are all rifles that have been owned and collected for years based on their military history or are guns used in hunting. Thus, AB 1663 would have drastic consequences as all these firearms are extremely popular and there are hundreds of thousands legally owned in California.

As stated above, according to current California state law, an “assault weapon” or “assault rifle” is a centerfire semiautomatic rifle that has a detachable magazine and possesses certain cosmetic features such as pistol grips or collapsible buttstocks. Through the use of a “bullet button,” California gun owners are able to purchase altered AR15s and AK47s. The “bullet button” prevents the gun from having a detachable magazine. The only way to remove a magazine is to use a tool, or a bullet - hence the name.

If AB 1663 passes and you own an AR15 or AK47 type rifle that uses a bullet button, it also will be considered an “assault weapon” and you must register it as an by July 1, 2018, legally dispose of it through destruction or by turning it into law enforcement, or it will be confiscated.

In other words, hundreds of thousands of rifles legal to own for decades will be considered “assault weapons.” These rifles are used for self-defense, sporting, hunting, and target shooting. The AR15 specifically, is considered the most popular type rifle in the country. If AB 1663 passes, however, all of these firearms must be registered as “assault rifles.”

Existing law generally prohibits the possession or transfer of assault weapons, except for the sale, purchase, importation, or possession of assault weapons by specified individuals, including law enforcement officers. Under existing law, “assault weapon” means, among other things, a semiautomatic, centerfire rifle or a semiautomatic pistol that has the capacity to accept a detachable magazine and has any one of specified attributes, including, for rifles, a thumbhole stock, and for pistols, a second handgrip.

AB 1664 goes a step further than AB 1663 and specifically redefines “detachable magazine” as an ammunition feeding device that can be removed readily from the firearm with the use of a tool. This language is meant to attack the “bullet button” or the “magazine lock,” which is a device that has been used to allow California gun owners to own AR15, AK47, and similar type firearms legally - without them being considered “assault weapons.”

It should be noted that this is not a loophole. California Code of Regulations Ch. 11 § 5469(a) specifically defines detachable magazine. It states, “‘detachable magazine’ means any ammunition feeding device that can be removed readily from the firearm with neither disassembly of the firearm action nor use of a tool being required. A bullet or ammunition cartridge is considered a tool.” Thus, it specifically allows for a bullet to be used as a tool to release a magazine in a firearm. This is exactly what is accomplished by a bullet button.

However, if you relied on the bullet button for your firearms and AB 1664 passes, those firearms will be considered “assault weapons.”

Subject to exceptions, existing law prohibits a person from making more than one application to purchase a handgun within any 30-day period. Violation of that prohibition is a crime. Existing law exempts from that prohibition a firearms transaction where neither of the parties is a firearms dealer if the transaction is completed through a dealer. Existing law prohibits a firearms dealer from delivering a handgun to a person whenever the dealer is notified by the Department of Justice that within the preceding 30-day period the purchaser has made another application to purchase a handgun that does not fall within an exception to the 30-day prohibition. A violation of that delivery prohibition by the dealer is a crime.

AB 1674 attacks a long standing exemption regarding firearms sales in California. Currently, gun owners are only able to buy one handgun every 30 days. This rule does not apply to long gun (rifle/shotgun) transfers or transfers that are conducted between two private individuals (as long as the transfer is done at a Federal Firearms Licensed dealer).

Therefore, if you attempt to purchase more than gun in California at a time you will not be able to do so. Instead, you must purchase one firearm, wait 30 days, and then purchase the next. Under this language, Californians will only be able to buy a maximum of 12 guns per year, whether they are handguns, rifles, or shotguns. The private party exemption (which allows you to buy multiple handguns at once from a private individual) also will be removed. Thus, there will be no exemption to the purchasing limit to all types of firearms.

In 2015, it has been said there were 1.51 million federal background checks for firearm purchases in the first 11 months of the year. I don’t know how many of those background checks were for the guns that could be affected by these Assembly Bills, but there is no doubt that it is in the hundreds of thousands, possibly even millions. Note that these numbers are only from 2015. Thus, I find it hard to believe that these Assembly Members have seriously considered how difficult it will be to obtain full compliance.

Additionally, considering the last implementation of an assault weapons ban in California where owners were required to register their firearms as “assault weapons,” California did a horrible job in informing its citizens of the registration deadlines and many failed to register their firearms because they did not know they needed to. History will likely repeat itself.

Also, a law limiting a law abiding citizen from purchasing more than 12 guns per year is likely an unlawful restriction of our Second Amendment rights. People will say, “who needs 12 guns per year, let alone more than 12 guns, in a lifetime?” Only the individual purchaser can answer these questions. Maybe they are collectors, or hunters, or sport shooters. Their rights should not be curtailed by these misguided Assembly Bills. If the purchaser has proven they are a law abiding citizen and have passed the background check, what harm is it if they buy 100 a year? My point is that the government does not try to limit how many products a person can buy in any other situation.

Bottom line - these ABs that have yet to be approved and signed by Governor Edmund J. Brown. Therefore, there is still time for them to be rejected or vetoed if they reach the Governor’s desk. However, just because these ABs are unconstitutionally restrictive, it does not mean that our California representatives and Governor will not pass them. Often, debatable legislation is easily passed and left for the courts to determine its constitutionality.

Until then, you can always attempt to voice your opposition by contacting your representatives to persuade them to vote against AB 1663, 1664, and 1674. For those of you who do not live in California, or consider California “too far gone to be helped,” note that California’s laws generally set the standard for other states that are trying to implement new gun control laws. So what happens in California may eventually affect you.

These ABs are a perfect illustration of gun control laws that are misguided. I assume they are a reaction to the San Bernardino shooting. However, the rifles used in that horrific scene were altered in a way that already violated most of California’s assault weapons laws. So what are these new laws supposed to stop? They would not have stopped this last shooting. These ABs would make hundreds of thousands of firearms illegal. Most of these guns will never be used in a crime. If these proposed laws are not meant to stop crime, are they meant to take lawful firearms out of the hands of the public? If so, it is a violation of the Second Amendment to the U.S. Constitution.

[The information contained in this transmission does not constitute a legal opinion and should not be relied upon as legal advice.]